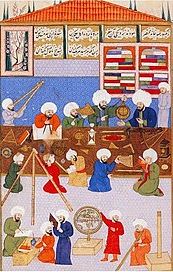 Arezoo Islami, Giuseppe Longo. Marriages of Mathematics and Physics: a challenge for Biology, Invited Paper, in The Necessary Western Conjunction to the Eastern Philosophy of Exploring the Nature of Mind and Life (K. Matsuno et al., eds), Special Issue of Progress in Biophysics and Molecular Biology, Vol 131, Pages 179¬192, December 2017.

The paper on line

Abstract: The human attempts to access, measure and organize physical phenomena have led to a manifold construction of mathematical and physical spaces. We will survey the evolution of geometries from Euclid to the Algebraic Geometry of the 20th century. The role of Persian/Arabic Algebra in this transition and its Western symbolic development is emphasized. In this relation, we will also discuss changes in the ontological attitudes toward mathematics and its applications. Historically, the encounter of geometric and algebraic perspectives enriched the mathematical practices and their foundations. Yet, the collapse of Euclidean certitudes, of over 2300 years, and the crisis in the mathematical analysis of the 19th century, led to the exclusion of « geometric judgments » from the foundations of Mathematics. After the success and the limits of the logico ­formal analysis, it is necessary to broaden our foundational tools and re­examine the interactions with natural sciences. In particular, the way the geometric and algebraic approaches organize knowledge is analyzed as across­ disciplinary and cross ­cultural issue and will be examined in Mathematical Physics and Biology. We finally discuss how the current notions of mathematical (phase) “space” should be revisited for the purposes of life sciences