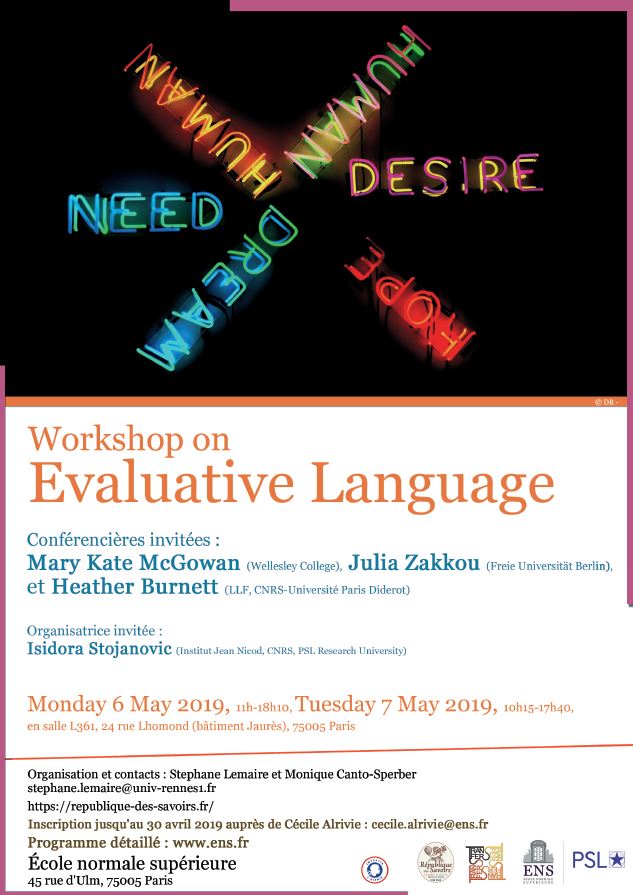 Language is replete with evaluative expressions; ‘good’, ‘bad’, ‘terrible’, ‘awesome’ are such expressions par excellence. In addition to such all-purpose evaluatives, many expressions with rich descriptive contents also convey evaluation. Aesthetic, moral and epistemic vocabulary largely consists of thick terms such as ‘harmonious’, ‘cruel’ or ‘justified’, which not only serve to describe things but also to say something positive or negative about the things so described. What is more, many words that are not evaluative in virtue of their meaning can nevertheless be used to convey evaluation. For example, to characterize a proposal as « ambitious » or « intense » can convey something good or bad about it, depending on the context. One could even conjecture that any given expression may be used, in a suitable context, as an evaluative device.

How a piece of discourse or text gets to be endowed with evaluative content is a complex and hotly debated issue. When does evaluation reside in semantic content? When is it a matter of pragmatics? How do the various pragmatic mechanisms (presupposition, implicature, free enrichment, intonation, and so on) enable language to express and convey values? Questions such as these are receiving a growing interest in philosophy of language, linguistics, aesthetics, meta-ethics and value-theory. Last but not least, the ubiquity of evaluative content in language has serious practical implications. Among other, it underlies phenomena such as propaganda, hate speech, stereotyping and verbal oppression.

This workshop brings together researchers from different horizons, with the aim of gaining a better understanding of evaluative language and its complexities.